What is a Coverlet? 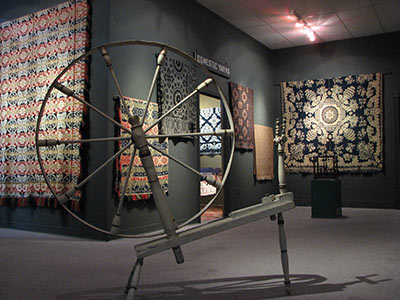 The National Museum of the American Coverlet focuses on antique American woven coverlets. Dated coverlets in the collection range from 1771 to 1889.

Coverlets are woven bedcovers, used as the topmost covering on a bed. The weaver worked on a loom to construct the textile itself one row at a time, and the pattern was woven in as part of the process.

In comparison, quilts are often made by cutting and assembling pattern pieces, then sewing them to a backing with a filler material in between – much like a sandwich.

A quilt is generally assembled from pre-existing cloth.
A coverlet is made from scratch.

Woven coverlets were popular in many states during the early-to-mid nineteenth century (1800s).

Coverlets were woven by both men and women. The two main types are called geometric and figured and fancy.

The pattern motifs in geometrics are based on circles and squares.

Geometric coverlets were woven by both women and men. Women generally produced them for their own use at home, or for barter with a neighbor. However, since there wasn’t a loom (and all the related equipment) in every household, there were professional weavers as well – usually men – filling in the needs of the community.

The patterns in figured and fancy coverlets are curvilinear and realistic and can include floral, animal, architectural and other motifs. These are the coverlets that most often contain inscriptions. Inscriptions can include the weaver’s name, his location, the year it was made, the name of the person it was made for, and sometimes a slogan of some sort. 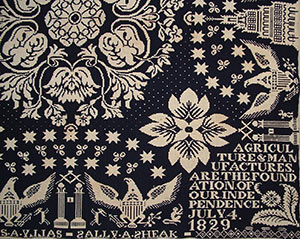 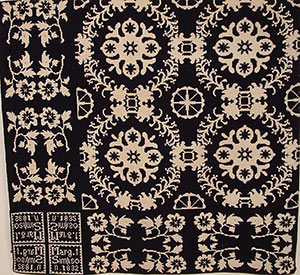 Figured and fancy coverlets were virtually all made by professional weavers – men. So when you see a woman’s name on a figured coverlet, it is the client/owner, not the weaver.

Coverlets were generally made of wool and cotton, although some are all wool. The wool was usually hand-spun and dyed with natural dyes. The cotton was most often machine-spun and left undyed. *

Unlike quilts, coverlets are reversible – intended to be used on either side.

That is why, when a coverlet has an inscription, it is almost always woven in backwards and forwards, to enable the observer to read it on both sides of the textile.

Because most looms were narrow, coverlets were often made of two woven panels joined with a center seam. Many geometric coverlets have two seams -- three panels joined. That is to say, the weaver had to weave the entire length of the coverlet twice, or three times, and hand sew them together next to each other in order to create a textile that was wide enough to cover the bed!

Copyrighted Materials. Excerpted in part from

Available at
The National Museum of the American Coverlet